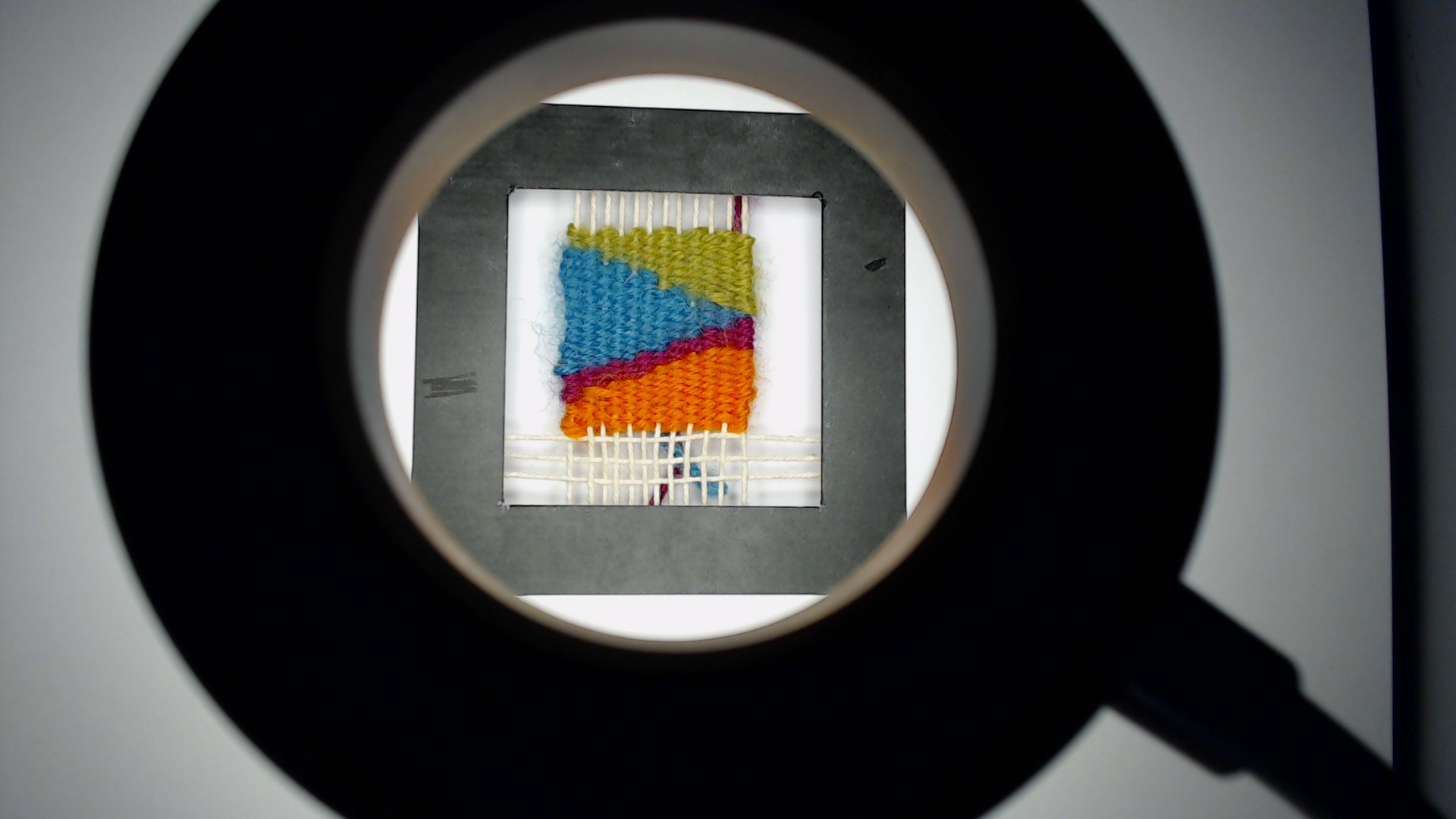 On Saturday, 19 June, artist, Fiona Mathison and dance artist, Louise Klarnett joined Valerio Signorelli and Leah Lovett, researchers in Connected Environments, for Unravelling, a performance workshop held at the Grant Museum of Zoology as part of the Festival of Intimacy. Organised by UCL Culture, the Festival of Intimacy was a day-long festival of intimate performances, conversations and interactions that responded to the theme of touch, and asked what intimacy has meant while living through the Covid19 pandemic. The event presented an opportunity to reflect on the loss that each of us, in different ways, has experienced over the past year: loss of previously enjoyed freedoms, loss of touch, and, for too many, the painful loss of friends and loved ones.

Unravelling invited audiences to weave their own markers as holders for memories of the people, places, and things they have missed. Each participant created their own woven sample using yarn unravelled from a specially knitted garment, worn by a dancer, and passed down with care to the group from the balcony above. Through the use of a discontinuous weft tapestry technique, they produced colourful patterns, which were in turn transformed into AR (augmented reality) markers via the use of the web-based open source tool AR.Js.

The links between weaving and digital technologies are widely known and have been rehearsed elsewhere. The to and fro of wefts through warps in weaving finds a neat parallel in the 0s and 1s of binary code. As Ada Lovelace famously observed, the automation of discontinuous weft weaving with the Jacquard Loom created a precedent for Charles Babbage’s ‘Analytical Engine’ and modern computing. The Jacquard Loom’s use of punch cards to generate repeating patterns in cloth is often cited as an early instance of computer programming.

For Unravelling, we repurposed picture frames as hand looms. The participants wound their own bobbins and passed them over and under the open warps to create small samples of cloth. Hand weaving allows time for reflection. Building an image in cloth, line by line, from the bottom up, practically demands quiet attention. The tracking back and forth as the yarn passes through fingers and warps is a way of both passing and marking time; of remembering and conveying memories.

Square picture frames were prepared with open warps and used as hand looms.

Unravelling created a bridge between traditional tapestry techniques, handed down through generations, and experimental AR technologies. Once completed, each participant’s woven sample had to be translated into a matrix of pixels, becoming the pattern recognised by the camera of the users’ smartphone. There was a set of parameters for designing the tapestries to ensure the success of the translation. The woven patterns had to be asymmetrical, with high tonal contrast between the wefting yarns. Ideally, the finished samples needed to be more or less square in shape.

Photographing the tapestries was the most critical part of the digital process, and we used a trial and error approach. Using a physical object as a marker created some challenges, for example, the shadows cast by the object altering the photographed image. A portable ring light helped to reduce shadows. It was important to use a white light with the right intensity, in order to reproduce the original colours of the woven marker as faithfully as possible. The camera had to be placed perpendicular to the object. As the image was converted in a 16 by 16 pixels matrix, a high resolution digital camera would not have provided any practical advantage.

The webcam was directed through the ring light to the woven object, which was in turn placed inside a black, printed frame. AR.Js enables a smartphone camera to recognise an image with a frame as a marker. In this project we used a cut-out of 9 by 9 cm with a border of 1.7cm thick, leaving an area available for the woven object of 5.8 by 5.8. The captured images were precisely cropped within the black frame, maintaining a square ratio.

The set up for digital capture of the woven markers.

These images have been converted into a pattern detectable byby the WebAR library, the 16 by 16 pixels matrix, using a modified version of the AR.Js Marker Training tool.

As a final step, the AR markers were linked with digital content that had been shared with us ahead of the performance workshop by the participants, including audio, images and 3D models. These digital assets were chosen as mementos of someone or something that had been lost during the pandemic. Interacting with the woven markers, the participants were able to explore a collective tapestry of cello scrolls, 3D modelled rabbits and discarded objects. At the end of the session, they were invited to take their individual looms and markers away as a keepsake.

Woven marker created by a participant in Unravelling.

Participants sent digital representations of people and things they have missed.

As an experiment in bridging the fields of tapestry and AR technologies, Unravelling points towards new possibilities for weaving as a form of storytelling, as well as alternative uses of open source tools for making interactive textiles.

The code can be found on Connected Environments GitHub repository:  https://github.com/ucl-casa-ce/unravelling